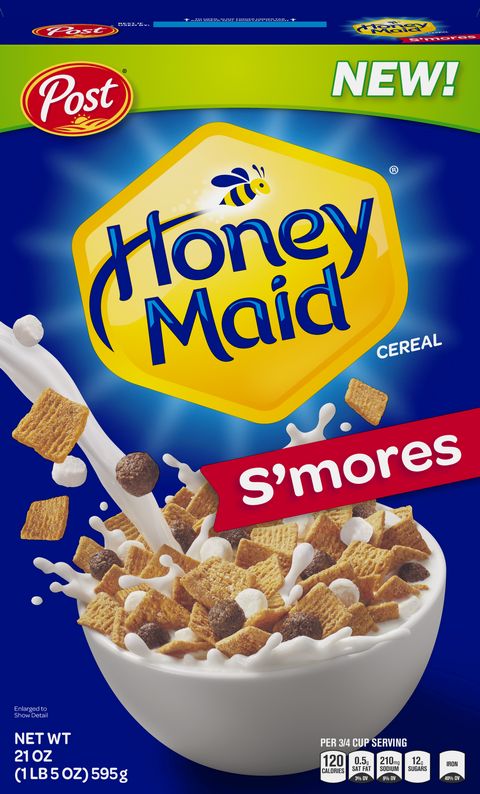 Honey Maid S’mores Cereal showed up in the store and we threw it directly in our cart. This is a flavor that is top of our list and allowing us to have it for breakfast seems like a major win.

Originality – S’mores are a classic taste that hasn’t seen a lot of love in the breakfast world lately, so it makes sense to try and see if it would stick this time

Sweetness – It is a sweet cereal

Flavor – The texture and taste of the graham part of the cereal is the same as Golden Grahams and there are a lot of marshmallows. The marshmallows number add a little too much sweetness but they were trying to shoot for some balance with the graham portion which overpowers a bit. For me the chocolate pieces were not chocolate tasting enough and even if I put just those pieces on my spoon they were still not chocolately enough.

Look – Gives you the three different pieces for each of the s’mores flavors.

Packaging – The packaging is pretty standard with no cartoon figures or anything special. The box gives the cereal the highlight.

Around the Table – While I felt there was not enough chocolate, Kid L seemed to enjoy it well enough. It did not become an instant favorite for her, but she seems fine eating bowl after bowl each morning.

Overall – Tone down the graham flavor, up the chocolate flavor and number of pieces and then take out some marshmallows and I think it would be much better.

The following scores (out of 5) were recorded during our cereal taste testing of Honey Maid S’mores Cereal:
Damon Cap – 3
Kid L – 4

I am the one that gets the family down at the table and takes notes for our cereal reviews and writes the final product
View all posts by Damon Cap →
This entry was posted in Post, Review and tagged Honey Maid. Bookmark the permalink.