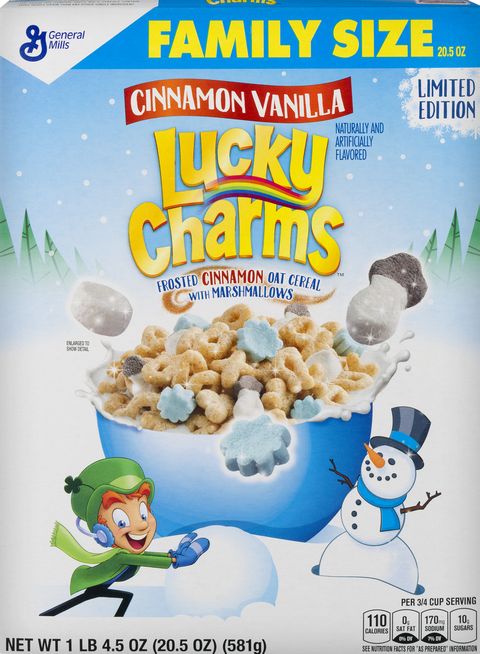 Another Limited edition cereal by General Mills has a mix of cinnamon with Lucky Charms in Cinnamon Vanilla Lucky Charms:

Originality – Cinnamon and Vanilla give you the warm winter feeling so it makes sense to try and capture that taste.

Mouth Feel – Nothing different than what you would expect with a Lucky Charms cereal.

Sweetness – It tasted to be the same level of sweetness as regular Lucky Charms.

Flavor – We think it had the perfect amount of cinnamon to compliment the marshmallows and oat cereal. The vanilla flavor though seemed to be more of a marshmallow flavor than a vanilla flavor. This is exactly what you think it is, a cinnamon flavor of Lucky Charms.

Look – It looks like Lucky Charms with a new snowman marshmallow.

Packaging – We are glad that we got a snowman on the package otherwise we might not have known what that marshmallow was. You definitely get the winter feel with this package and Lucky in the snow.

Around the Table – It was interesting because nothing really stood out that much to mention here. Everyone gave it the it’s decent vibe.

Overall – The following scores (out of 5) were recorded during our cereal taste testing of Lucky Charms Cinnamon Vanilla Cereal:
Damon Cap – 2.5
Kid L – 3

I am the one that gets the family down at the table and takes notes for our cereal reviews and writes the final product
View all posts by Damon Cap →
This entry was posted in General Mills, Review and tagged Lucky Charms. Bookmark the permalink.