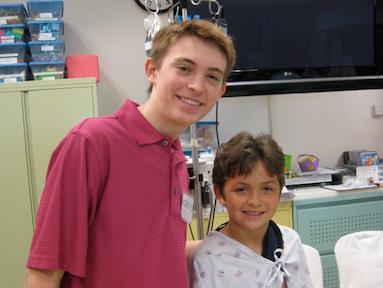 Favorite Cereal: At home it’s a no brainer, Cheerios! At work I dip into oatmeal with fresh fruit.

Dylan Riley Snyder has been involved in acting from the beginning. Four days after his birth, he began attending rehearsals with his mother and sister in a children’s production of “Winnie the Pooh”. With acting in the family, it wasn’t a surprise that he began his acting roles at 18 months. The family soon found out that he enjoyed being on the stage and began letting him audition at the tender age of 5, where he won his first speaking role as Tiny Tim, in “A Christmas Carol”. After performing in several community theatre shows, Dylan wanted to take a chance on New York. On Dylan’s 9th birthday he and his mother settled into a Manhattan apartment. Within no time Dylan was thrilled to call home and let them know of his first Broadway show booking in Disney’s musical, “Tarzan”, as Young Tarzan. Currently he plays ’Milton,’ the geeky, book-loving kid that turns into a Karate expert thanks to the Bobby Wasabi karate studio and the support of his friends in the Disney XD series, “Kickin’ It.” He also partnered with the American Cancer Society to become the Youth Ambassador for the LOLLIPOP Theater Network.