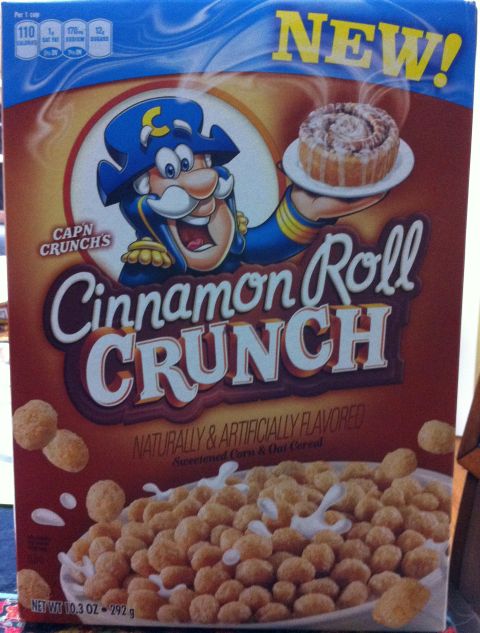 Cap’n Crunch Cinnamon Roll Crunch Cereal sounds like something you should have for breakfast, here is how it broke down:

Originality – I was a bit disappointed they went with balls rather than something trying to look a bit more like a cinnamon roll.

Mouth Feel – The wife stated it was the same crunch and texture you would expect from the Cap’n extended brand as she said it felt like Peanut Butter Cap’n Crunch. It stays crunchy in milk and she said it does not hurt your mouth like the original Cap’n Crunch does to her. I found it a bit gritty.

Sweetness – Not too sweet. A pleasant level.

Flavor – The cereal has a mild cinnamon flavor to it, the icing part was not distinct though.

Look – Round balls like the peanut butter version of the product.

Packaging – The Cap’n holing up a cinnamon roll on a plate is a good look for him. The problem is that cinnamon roll isn’t involved in the actual cereal portion of the box. Seems like two distinct products almost.

Around the Table – While I was not overwhelmed with the cereal the rest of the family called it a winner. The boys are also big cinnamon roll fans so a cereal based on something they love for breakfast is always a plus. Extra bowls were had by both of the kids.

I am the one that gets the family down at the table and takes notes for our cereal reviews and writes the final product
View all posts by Damon Cap →
This entry was posted in Quaker Oats, Review and tagged Cap'n Crunch Cinnamon Roll Crunch. Bookmark the permalink.