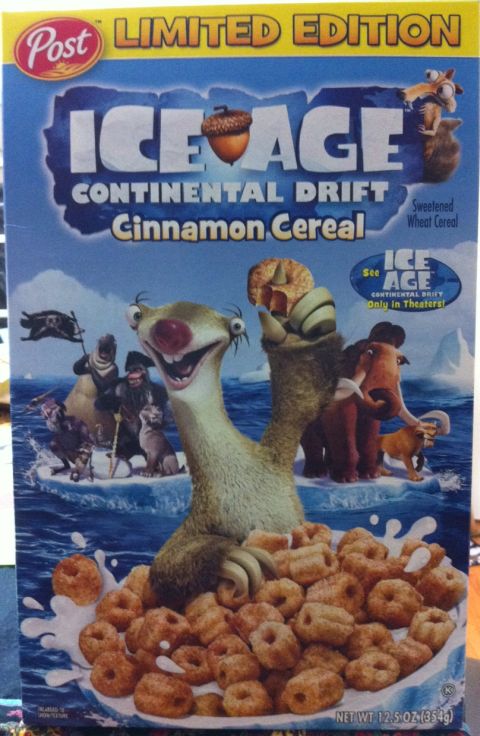 Ice Age Continental Drift Cinnamon Cereal is a limited edition cereal that has come out to coincide with the Ice Age movie. See how we like it below:

Originality – I think the originality is more about the movie tie in here than the cereal. We have a cinnamon based cereal, competing with a few others already on the market

Mouth Feel – I felt that they were a bit too puffy and crunchy, but it seems that the family thought otherwise. Kid C thought they were a bit hard but he liked them. Kid N loved the rounded edges of the cereal, commented on liking the shape much better than some other cinnamon cereals. Said there were not sharp edges like Cinnamon Toast Crunch and was softer. Jocelin Cap liked the fact that were a bit crunchy in comparison to other cereals. She said she does not feel like she has to be in a race to get to the bottom of the bowl to keep it from getting soggy like most of the other cinnamon cereals.

Sweetness – It may have been a tad too sweet for me, I really was unsure here. Kid C say it was pretty sweet and Jocelin Cap said it was not as sweet as Cinnamon Toast Crunch, but had more cinnamon. She compared the ratio to the opposite of Cinnamon Toast Crunch in sweetness and cinnamon if that makes sense.

Flavor – I thought it had a bit too much cinnamon but the rest of the family disagreed with me.

Look – They looked like mini churros, which is a good thing considering the taste is similar

Packaging – uses the movie to its advantage when it comes to the packaging, offering all sorts of movie apps games and information to draw you in. Good marketing.

Around the Table – Like I said I felt the cereal had a bit too much cinnamon, but again, cinnamon isn’t one of my favorite spices when used with a heavy hand. I don’t even put it on my rice pudding. My son Kid C had a second bowl so that was a positive sign, and Kid N loved it claiming it as one of his favorites. Shame we are working on a limited edition cereal here as I believe my wife would put this in the regular rotation for the kids.

I am the one that gets the family down at the table and takes notes for our cereal reviews and writes the final product
View all posts by Damon Cap →
This entry was posted in Favorite, Post, Review and tagged Ice Age Continental Drift Cinnamon Cereal. Bookmark the permalink.