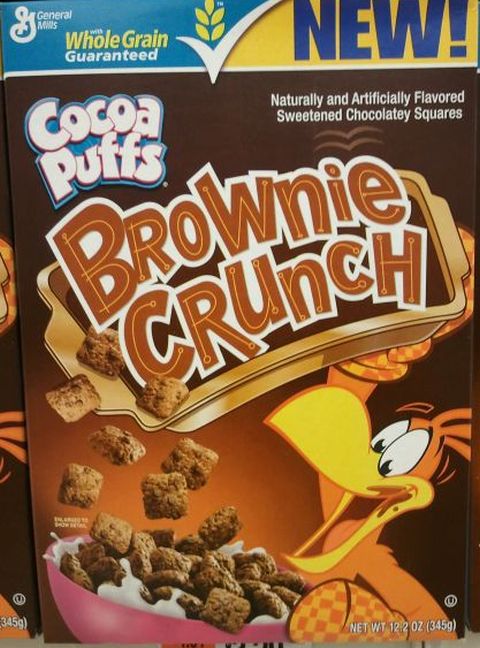 Cocoa Puffs Brownie Crunch Cereal was on our weekend agenda for review and the information is below:

Originality – Brownies in a bowl form for breakfast sounds great, I love brownies. The appeal to the kids is also high, because they normally think of brownies as dessert and they think they are getting one over on your by eating dessert for breakfast

Mouth Feel – They had a sort of Captain Crunch texture to me, a little too hard around the edges until they got to soaking a bit. When I think of brownies I think of something a bit more gooey and soft though. Jocelin Cap thought the cereal was not too hard.

Sweetness – We all agreed that the sweetness level was good for the cereal.

Flavor – The cereal was not super chocolaty, it had a very subtle hint of brownie to me, but you really have to search for it and I do not want to do that much work at breakfast. Jocelin Cap said the flavor was pretty much Cocoa Puffs with some chocolate chips thrown in. I can’t deny that, I think the chips are the subtle brownie taste I was talking about.

Packaging – The brownie pan is a good look on the front, but Sonny is still cuckoo for Cocoa Puffs. Again the packaging still lets you know you are trying something new, but you will know it is related to Cocoa Puffs.

Around the Table – First, let us get the big win out-of-the-way. We were all happy with the fact we were left with a nice chocolate milk after we finished the cereal. To me it was not that it was a bad cereal, I just was expecting more from the brownie aspect. I think if we had a consistency change to make the cereal less hard, and went a little softer it may have helped. The chocolate level also did not scream out brownie, it was too laid back of a taste for us.

The following scores (out of 5) were recorded during our taste testing:
Damon Cap – 2.5
Jocelin Cap – 2.5
Kids C – 3
Kid N – Does not like chocolate in any form, so he did not taste Cocoa Puffs Brownie Crunch Cereal

I am the one that gets the family down at the table and takes notes for our cereal reviews and writes the final product
View all posts by Damon Cap →
This entry was posted in General Mills, Review and tagged Brownie Crunch, Cocoa Puffs, Cold Cereal, Damon Cap, Jocelin Cap, Kids. Bookmark the permalink.